My youth is peppered with Astroland, the Cyclone, Ed Koch

Getting lost on the beach but remembering

Our towels were near the boardwalk

not completely in line with the Wonder Wheel

The long line to the Aquarium

The long line to Nathan’s

The long line to the Circus

Wanting to be a mermaid

Wanting to be a barmaid

Blaring as we rode and flew

Against the faint rumbling of the trains

The salt water stuck to our skins

as we lived in the Moment

Of possibly falling off the Cyclone.

They are all very strong within me

Sometimes they all get confused within

When I try to pull them apart

They gravitate to the each other

Unable to grow without the other parts

Intuition is as passionate as faith

Passion is as faithful to intuition

Faith is as intuitive as passion

Faith is a passionate intuition.

I thank the wordsmith who said it

He has always been an unknown source

Of faith of passion of intuition

For poetry is the spontaneous of overflow of powerful feeling.

The Monday after the Climb to the Top of the Rock brings awareness to mind, body and spirit. Yes. This will be a mushy post as I really stepped out of my comfort zone doing this climb.
How so when my life is an open book?
Well, I can talk about theatre and New York City for days on end. I do talk about struggles and how I manage to overcome my fears around them. However, I don’t always talk about my MS. The most you may have heard about it is over the last few months as I raised funds for my Climb with my team, Malini’s MS Busters.
Why do the climb for the National Multiple Sclerosis Society?
1. I don’t see myself as suffering so by speaking about it, I’ve taken control of the disease in my mind. I’m not MS.
2. When I got laid off last year and lost my health insurance, I made three calls: my husband, my best friend and the National Multiple Sclerosis Society. I had to make sure I was able to get my meds. They took care of me so the disease wouldn’t progress and ravage my body.
3. I’m intrinsically lazy (I know that sounds strange) so doing anything strenuous sounds like a bad idea. However, climbing 66 flights of the beautiful Rockafeller Center just seemed really cool and the challenge I needed to keep my spirit strong.
My results:
My kudos:
Final thoughts:
Thank you and onward!
Keeping It Real,
Malini 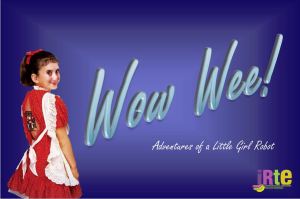 Friends! Happy March and Spring (if I write it, it will come). The new year has been busy and we are only now entering month three. Wow wee!

Wow Wee indeed. Nannette Deasy and the Improvisational Repertory Theatre Ensemble (IRTE) kicks off their 4th season with Wow Wee! Adventures of a Little Girl Robot which opens on March 7th for three Saturdays.
Nannette shares why she created the company and the many challenges and successes of producing improv as an ensemble company.

What was the impetus of IRTE?

I had been an actor in New York and an improviser for many years. Improvisational acting really appealed to me because of its playfulness, immediacy and rawness. I also loved the fact that I could just play whoever and whatever I wanted despite type or physical limitations. It was just so addictively fun!

I’d been a member of many improv groups and companies over the years, which I loved and continue to love (I’m involved with a bunch of other wonderful performance companies besides IRTE). However, as I started developing my own ideas about how a company could and should work, I decided to go ahead, take charge and do it. By having my own company, I could choose the performers and directors I enjoyed working with, liked and respected and implement the aesthetic I enjoyed. I really do love working with the other members of the ensemble and the guest performers and directors we’ve been lucky to get over the years

Before I started IRTE I’d also noticed something else, actually a lack of something that really interested me – I felt improv could be more theatrically staged (and more fun for general audiences that weren’t necessarily familiar with improv). I wanted to bring what I saw were the best elements of traditional theatre and meld them with what I saw happening in the improv community – the creativity, humor and spontaneity of live comedy improvisation; and the traditions, values and professionalism of traditional repertory theatre.

What I wanted was a tight ensemble of comedy performers who would all work collaboratively to develop, produce and perform original themed, theatrically-staged, and character-driven improvisational shows. Ultimately, I want to create a professional improvisational theatre, to reach beyond the common perception that improv is something only seen in  “student”  productions offered by training programs. I firmly believe that improvisational theatre can exist on the same professional level as scripted commercial theatre.

How has the company grown over the last four years?

Since we have such a small budget, we in the company all work very hard behind the scenes to self-produce. Over the years, we’ve learned to handle our own budgeting, video production, photography, marketing materials, and other operational tasks – in addition to performing and directing!

There’s been a huge learning curve, of course, and it seems that with each year, we learn a little bit more. When we first started out, we were performing in bars and as guests of other shows. That certainly was a very budget-friendly way to begin. However, while more expensive, we’ve found it’s better to rent our own theatre space, over which we can have some control. Plus, It’s much better for maintaining a consistent audience than when you’re jumping around from place to place. Sometimes, you also get what you pay for. One venue we performed at was shut down by the fire department right before a performance. This was the same place where I had regular run ins with the host of a stand up open mic night that didn’t understand why they couldn’t go over their time by an hour or so. Another bar was very welcoming but we were competing with the constant din of karaoke just outside the room.

Since our inception, we have created fourteen completely original shows (with five more currently in development), performed in ten national festivals, featured up and coming indie musical artists, hosted workshops, and have received increased recognition from the downtown New York theatre community and the national improvisation scene. We’ve been super lucky!!

Was there a moment when you considered taking a break or doing something else?

Ha! Yes! Every year just as our Season is coming to an end and we’re all exhausted! … but then we get invited to a really fun festival or I start missing performing with my IRTE friends or someone in the group floats a new bizarre idea for a show and I start looking towards the future.

What keeps you and the company going?

…that this, ultimately, is way more fun than the alternative.