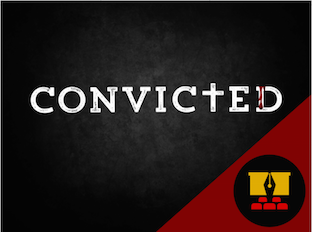 What is your current project? Convicted – A New Play

“Convicted” is being performed with the Broadway Bound Theatre Festival. It’s a perfect fit because it’s a world-premiere, and BBTF is committed to cultivating and celebrating new works. The platform of a festival is a great way to try your hand at a show that takes a few risks, challenges audiences and plays a bit with structure, all of which “Convicted” does to – hopefully – great success.

SYNOPSIS:
After discovering one of her subordinates has been accused of a brutal murder, Amy, the local director of an LGBT advocacy organization, must help the detectives piece together what happened. Once the circumstances start to unravel the one question left to answer is how far would you go for what you believe?

It’s a gripping one-act play that flies back and forth through time, with the feel of a fleshed-out Law & Order episode. Anyone who likes crime drama, whodunits & whys, and theatre made to challenge, will enjoy “Convicted”.

There are many irons in the fire, which one gets struck depends heavily on who gives me what hammer.

Noises Off at Shadowland Stages.

Keep on keepin’ on.

Having been compared to Jonathan Larson, Jason Robert Brown, and Jeanine Tesori, Riley Thomas has developed his unique sound of contemporary musical theatre influenced by pop, rock and jazz. A champion of alternative characters, ethnic integration and using theatre for evolution, Riley Thomas continues to challenge the audience perspective by exploring stories that are often overlooked in favor of glitz, glamour and fluff.

Riley Thomas is a New York based playwright/composer. He is a member of ASCAP, a 2016 Weston Playhouse Invited Artist, recipient of the Anna Sosenko Assist Trust Grant and Johnny Mercer Songwriter’s Certificate. His musicals Stuck and Wearing Black have collectively won five awards at the New York Musical Theatre Festival (NYMF). Stuck has since gone on to be produced as a full length Hollywood feature film starring Giancarlo Esposito, Amy Madigan and Ashanti. His work has been performed all over the country and in NYC, notably at famous venues such as Lincoln Center, Playwrights Horizons, Feinstein’s/54 Below, the Metropolitan Room, the Laurie Beechman and the Duplex.