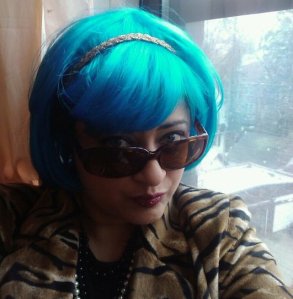 I know I have been a bit silent in the blogosphere  and I am sure everyone was just sitting at their computer awaiting my post to pop up in their in box, appear on their FB newsfeed, and following #whereMalinibe?

So much has been going on. It has been a whirlwind since the readings of Imaginary and my short vacay in Myrtle Beach.

Thank you for being so wonderfully awesome and supportive. I need to say it as I type it so you can then read it and absorb it.

Now here’s a run down of everything:

The reading was super successful. Nick and I met with a film exec who would like us to work on the screenplay version of the play. So, Nick and I are exploring that avenue.

TBB celebrates it’s one year anniversary next month. The newsletter is still going strong and has now grown into my PR/Marketing Firm. My current clients are Naked In Alaska  and See Jane Give Up Dick in this summer’s FringeNYC. The TBB website is currently being constructed so stay tuned for more info.

The EstroGenius Festival is celebrating it’s 14th year. Black Henna is super excited to be in collaboration with them this fall…

…as we are producing the world premiere of Manny Liyes’ Runo Rimac.  The play revolves around zombie, Runo, a hulking, savage mass (found in the Lost and Found at the Waldorf-Astoria) who’s only purpose in life is to feed on human flesh to survive. But Dickie, our down and out actor, reaches Runo and they in turn see something salvageable in each other. Dickie “raises” him and gives him a knowledge of the world, ultimately making life more challenging for our zombie.

I know. You’re like what about your neighborhood, Malini? Well, yours truly has contributed to an upcoming book on the ‘hood. Ian and I will have our building ,which was built post-World War I as part of the garden apartment houses plan of the early 1900s, in the book. Pictures and captions. This has been a 15 year labor of love that has finally come to almost completion. As you can imagine, it’s pretty exciting.

So, that’s what’s been happening.  And scene.