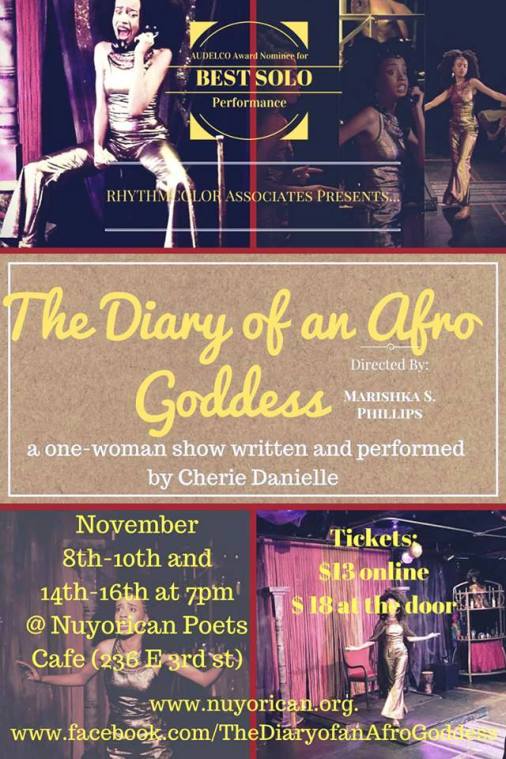 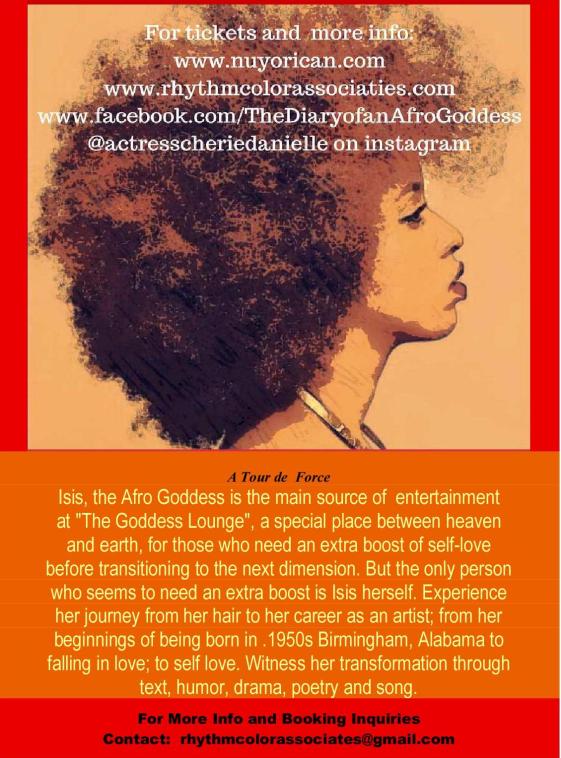 The Diary of an Afro Goddess, REMEMBERIN’ ME! a healing journey back to self & Day of Absence!

Producing The Diary of an Afro Goddess and REMEMBERIN’ ME! and performing in NEC’s 50th Anniversary performance of Day of Absence. Afro Goddess is presented at the World Famous Nuyorican Poet’s Cafe and the space is ideal because through out it’s history, the Nuyorican has presented on edge spoken word and avant-garde theatre. REMEMBERIN’ ME! is premiering in our new event, RA Pop-Up Family Theatre & Dinner at The Paul Robeson Freedom School, housed at St Luke’s and St. Matthews Church in Brooklyn. An ideal location for RM because our goal is to reach the community. Day of Abscence is being presented at Theatre 80 St. Marks, an historical space that was around when the Negro Ensemble Co. was founded down the block, 50 years ago.

After the above 3 projects, which end Dec 15th, RHYTHMCOLOR Associates will be presenting POTPOURRI! Part II – Work In Process, featuring a Backer’s Staged Reading of new play by Maryam Myika Day and directed by Elain Graham on January 10, 2017 at the National Black Theatre in Harlem, NY and directly after, RA will present our 2nd Annual Evening of Appreciation of Trailblazing Women & Institutions, January 29, 2017 at ART-NY South Oxford Space. For more information on all these projects:

My parents, always. The are both artists and taught me so many important cultural history and the importance of family.

The Diary of an Afro Goddess/www.nuyorican.org & $18 at door.

REMEMBERIN’ ME! a healing journey back to self