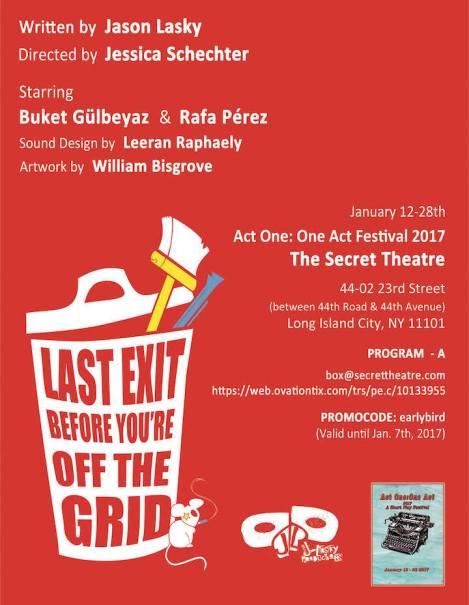 Last Exit Before You’re Off The Grid. This started out as a play about America in the future, but I conceived of it way before this past November. After the 8th, it seemed rather funny I’d had these thoughts, and then I went ahead and made some more specific references.

The Secret Theatre’s Act One: One Act 2017 A Short Play Festival. ST thinks it’s a good fit with the other plays they’re showcasing each night.

I am currently in Nairobi, Kenya working as the Head of Drama at an international school and am actively working on several theater projects: my full-length drama 40 Days of Night (supported by a grant from Theatre Communications Group and the Moscow chapter of the International Theatre Institute) for a premiere in Russia; a full-length tragicomedy co-written with my wife that ties Kenya and China together; a one-woman show; a one-man show; a physical theatre, Butoh-inspired piece for the ITI’s 35th World Congress in Spain this coming summer; I am leading drama teacher training for a group of LAMDA teachers in Nairobi; and I am talking with the the national coordinator of the Zimbabwe Centre of the ITI to lead movement workshops for the next generation of theatre artists in the spring- all this while finishing up my dual IB Teacher Certification and Masters of Education, for which I’ve maintained a 4.0 GPA throughout the last four semesters, and raising my son and daughter with the most supportive woman in my world.

It’s a toss-up between my wife and me. It’s her because she’s got a million and one complete plays in her head. It’s me because I’m the one figuring out how to bring those to life while also breathing life into mine.

Jason Lasky is a playwright, actor, director and teacher. He is an alumnus of the Actors Studio Drama School MFA Playwriting program. He is the co-founder of Shanghai’s 5th Wall Theater and J. Lasky Productions, an international theatre company dedicated. His play Rendezvous: A Tragicomedy, co-authored with his wife Svetlana and presented at Shanghai LGBT’s Pride 6, was the first English-language play addressing transgendered identity in mainland China. His plays have been performed on three continents and translated into Chinese and Russian, and his one act play Mend the Envelope was published in QU Literary Journal in January 2016. His latest collaboration in Murmansk, Russia, 40 Days of Night, has been made possible through Theatre Communication Group’s On the Road grant. He has been publicized internationally, most recently in ITI-info magazine. Jason is currently the Head of Drama at Hillcrest International School in Nairobi, Kenya.

January 3, 2017May 29, 2017 by malinism Categories: TBB Interviews, TheaterTags: Jason Lasky, Last Exit Before You're Off The Grid Leave a comment