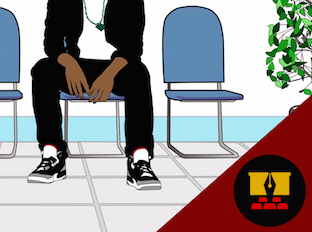 What is your current project? In the Room, Waiting.

In the Room, Waiting is being performed as part of the Broadway Bound Theatre Festival in NYC. I am so thrilled to be a part of a festival that puts playwrights and their work front and center and it couldn’t be a better fit for myself as a playwright and for the show as a whole. I am so excited to produce this story that is so near and dear to me as a person with such an incredible group of Actors of Color. I know audiences will love this originally told, heartfelt and funny script that questions fate, choice, and when the right time to bring a life into this world.

I am currently Acting in Lobby Hero @UNO, which was co-produced by myself and the University of New Orleans. I will be return to my home base in Brooklyn in July to begin rehearsals for In the Room, Waiting.

Create the art you want to see in the world.

Thaddeus McCants is Brooklyn based Actor and Writer originally from Madison, Wisconsin. As an Actor worked Broadway, and Regionally including working with Disney Theatricals on their newest musical, Freaky Friday. On the small screen and as a comedian he has worked with HBO, Comedy Central, and MTV. His web-project Fakers, has been a selection in several Webfests worldwide.