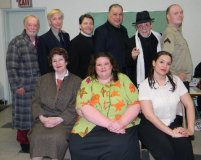 See How They Run closed this weekend after a successful three week run. After my shows close, I always do a post-show wrap up which consists of me reviewing what I learned and what I would do differently next time (hence, my Round Robin).

Without further ado, here’s my lessons from See How They Run:

“See How They Run” is a Wildly Entertaining Production

There are not too many productions that do high energy comedies right. A characteristic of such comedians as the Marx Brothers and Three Stooges, pulling it off correctly is like a gamble. The risk of failure outweighs the reward of success. The Parkside Players production of “See How They Run” manages to pull it off without trouble and making one of the most entertaining productions in Queens.

Set in 1940s England, American actress Penelope Topp is living the quiet life with her vicar husband, Reverend Lionel. When an old friend from her acting days comes to visit her, it ignites a series of events involving mistaken identities, thrills and pratfalls.

The entire cast should be commended for never bringing the energy down when the comedy reaches its boiling point. The cast is invested in all their roles and none are sleepwalking through their performances. The cast play off each other effortlessly. The most noteworthy of the cast has to be Natalie Y. Jones as Ida, the maid of Penelope and Lionel. Not only does she do a fantastic cockney accent, but her comedic timing is spot on every time she is on stage. She brings out a tough, yet easily flattered lady who is relatable on many levels.

You might be asking yourself as per the title, does the production have a scene where the cast runs around. It happens quite a few times, but to mention why would spoil the fun of experiencing it firsthand.

If you do some research on the play you will find out it was written by an English playwright. You need not worry about it being strictly British humor. The production appeals to all ages and young and old will be laughing together to the very end.

Director Malini Singh McDonald smartly builds up the comedic energy slowlylevel rather than inundating the audience in each act. That makes the play as a whole more enjoyable as the anticipation of the hijinks that occur is are more comedic. The production cannot be recommended enough. It is a funny, laugh-out-loud experience that is suitable for the entire family.