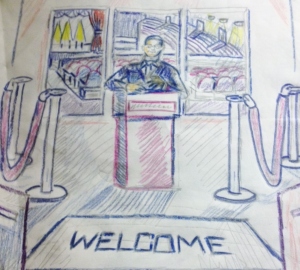 In light of the latest Patti Lupone‘s stand against blatant use of cell phones in the theatre, I thought about my own experiences in the theatre. Now it is absolutely true that my upcoming project, Rise of the Usher written and performed by Jessica Elkin, is about the theatre experience. I have had many wonderful and awful experiences.

I’ll start with one of the worst. I purchased seats for a weekday matinee performance of a play on Broadway. The leads were A-List actors and I was super excited to see the play with my friend. Throughout the entire performance, audience members were whispering, eating, and texting throughout the performance. The ushers did NOTHING. I was just in shock because how often does one get to see this caliber of actors on stage. And the closing monologues was breathtaking!

My best experience is whenever an unruly patron is asked to leave. I have seen that a few times and the ushers have never been rude about it. Just “you gotta go”.

Here are the experiences of the producer and director of Rise of the Usher:

My best usher experience was actually at a Brooklyn Nets basketball game this past April. My 84-year old grandmother was standing up for the t-shirt toss that the Nets dance team does at each game. None of the t-shirts were tossed her way and one of the ushers nearby spotted the slight disappointment on her face about this. He went out of his way to find a Nets employee, who could grab a t-shirt for my grandmother and then handed the t-shirt to her. The smile on her face was priceless and he really made her game experience extra special by doing that.

My best experience with an usher was after I had waited out in the bitter cold to see the last performance of Waiting for Godot with Ian McKellan and Patrick Stewart on March 29, 2014. I froze my *ss off waiting on line for hours, getting up at 3am for tickets since I never knew when I’d be able to see Ian McKellan onstage again.

Finally…after  hours of clock watching, holding places for other hopefuls’ coffee and  bathroom breaks and waiting for the sun to come up for some warmth, I  arrive to the box office with cash for me and my friend Ana who was at home with her kids in Jersey so she couldn’t wait with me this time. I make the cut off! I get TWO tickets!

I return to the theatre for the performance after napping and showering, meet Ana outside The Cort and soon a very handsome carmel skinned usher with big brown eyes in his 20’s takes Ana and I up to our seats….which turn out to be way up in the boxes. I thought “well that can’t be so bad it’s a balcony!” But it was bad. It was an obstructed view. I asked him if there were any other seats. He apologized and said that the show was sold out.

We had to lean over very far, practically on top of each other and did not see the scenes performed under this “overhang” (!).I froze for HOURS to have Ian McKellan performing underneath my butt! I don’t think so.

My strategy was to snag the 2 empty seats in the 2nd row that I spotted during the bits I couldn’t see. They were center on the aisle… Ana and I made a beeline at intermission to snag those seats.

Now I had to have those seats. Her killjoy factor alone made me want to pimp out my friend Ana with her even post baby model body to seduce the hot usher who took us up to the box seats who was now in the orchestra seating people. But I decided to tell him the truth: “these 2 seats were empty during intermission and we can’t see a thing up there. So when we tired to sit in these seats this lady in the 3rd seat said “we couldn’t sit there because they were not our seats. Would you help us?”

The usher turns and escorts Ana and I down to the 2nd row center, looking fiercely at the woman who didn’t want us in the seats and proceeds to seat us, gave a quick smile and off he went.  I saw Act II of the last performance of Waiting for Godot in the 2nd row center!!! Ian was practically in our lap.  It was a thrill to see Ian McKellan’s specific physicality and expressions and his chemistry with Patrick Stewart. The handsome mystery usher gave me the best seats I’d ever had, a good story and being the recipient of a random act his kindness.

Come see what one usher will do to rise to the top of an ant hill.