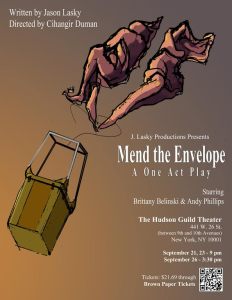 Sometimes one can get so lost in dreams that reality is almost another realm. Jason Lasky’s Mend the Envelope tells the harrowing story of a married couple broken by events of a single poor decision. Questions of faith and purpose are told under the careful direction of Cihangir “G.” Duman. Set on a almost bare stage with set pieces strategically placed, Henry and Joanie Davis’ relationship unfolds before the audience. Played by  Andy Phillips and Brittany Belinski, the actors honestly share glimmers of a once successful and exciting life abroad to their current mundane and shattered life in upstate New York.  Fern Lim’s lighting and sound design flawlessly shifted us to dreamscape and added a another layer to the one act. I would love to read the next scene of this one act to find out where the Davises go in their relationship.

Mend the Envelope is playing as part of the Thespis Festival for two more performances.