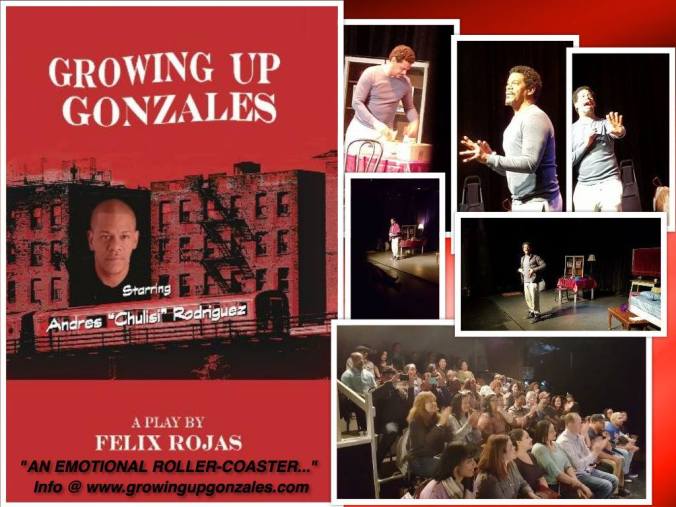 Growing Up Gonzales is a poignant, hilarious, moving solo show about two Puerto Rican brothers from the Bronx. Played with expert precision by Chulisi, Johnny is tasked with cleaning the apartment of his recently deceased brother, Cisco, when he stumbles upon Cisco’s diaries. A treasure trove of memories, Chulisi shares those moments through the eyes of Cisco, his abuela, “la chilla”, the hooker with a heart of gold, Boo Boo and others. He oscillates to real time as Johnny with a simple costume piece. Those stories include time spent in Puerto Rico, going to church, his father’s funeral, cooking in his mother’s kitchen with an attitude, getting sick, Johnny’s drug addiction, and so much more under a layer of humor.

As a Trini-New Yorker, I could relate to the stories even if the people are from a neighboring island in the Caribbean. Everyday life is infused with dramatic and tragicomedic moments. As a matter of fact, the first time I met Felix was a day of drama. He and Chulisi sat with me to talk about the earthquake, building the show over the years and the next steps.

Malini: We were invited to celebrate Ken Davenport‘s birthday at Great Adventure. It was Felix, Mark Allen (who ended up winning Ken’s prize to be the composer for his show, Garage Band), and my husband. We ended up spending the whole day together…remember the earthquake?

Felix: They closed the rides for a couple of hours because of the earthquake.

Malini: We were getting on the Superman ride.

Felix: You have a great memory.

Chulisi: That’s crazy. That’s scary. Did you feel it?

Malini: Yes. True story. When was that?

Malini: You were going to Jan Hus and I remember I couldn’t come to it. And that’s why this is interesting when you don’t hang out with people you hang out with once and been following this for 5 years. I guess I was supposed see it when I was supposed to see it. I was really moved and had so much identification with this story as a Trini and New Yorker. Especially the way you beautifully balanced these touching life moments with the everyday stuff. Like the kitchen. The grating of the vegetables! I have gotten that yell from two rooms. Come here and grate the cheese! How much of this did you work with Felix in developing?

Chulisi: It’s all Felix’ writing and in 2012 it was a different beast. It’s day and night. People who saw it in 2012 and see it now ask if it’s the same play. It’s completely different. The set is completely different, the dynamics of the brothers are completely different.  I am a different actor than 3 years ago when we first did it. I came to it this time with layering. I said to Felix we have to layer this. I don’t believe in doing a project that isn’t personal to me and this is very personal. I am a recovering addict. I was Johnny. I was Cisco who became a Johnny. My sister was one of the first people who had the virus when it came out in the ’80s. So much of the story is more me. For him [Felix] it’s not. Very little of his life is in it.

Chulisi: Very little of his [Felix] life is here. I tell Felix he just writes for me. This time around, Felix would give me a direction and I would tell him what I am feeling. He would say okay, that would work or wouldn’t work. We always came to finding the layers. That’s why it is so intense.

Malini: Let me ask you this. You wrote this, directed, and produced and I know what it’s like to wear those three hats at the same time and your brain wants to explode. How was that relationship.

Felix: We had a productive relationship. Lots of respect for each other. Since 2012, he has done some amazing things. I follow him. I watch what he does. I have grown as an artist and as a person. When I did this show in 2012, it was the first thing I had done in 17 years. I took a hiatus…forever…and thought, “let me give this thing one more shot.” It was very dynamic. It was magical. It was hard. It was tough. The first time we did the show, it was very different. Chulisi already had his characters in him. The hardest part of the process is exorcising those characters that were already there. He was Johnny a certain way and Cisco a certain way. So that was the toughest part.

Chulisi: In 2012, Cisco was played slow and Johnny was an asshole. Straight street. This time around the dynamic is Johnny actually realizing who Cisco is instead of already knowing who Cisco was.

Malini: What’s next for this?

Felix: We want people to come see the show. We are looking to have it move to a bigger venue that would add elements to the piece. Possibly Netflix.

Chulisi: This is a full story. A tangible story.

Felix: The goal is to get people see this show.

Chulisi: We are two independent Puerto Ricans. It’s been a great run.  People are walking up 3 flights of stairs to see it.

Felix: This show is great for our people. They eat it up. It’s an experience of a lifetime. But I think it can reach the general audience, the Off Broadway audience that always go to shows. I think they would like it. They live for these kinds of experiences.

Chulisi: I think this story relates to everybody. If you can’t relate to the very Spanish stuff, you can identify with the AIDS epidemic, the drug addict, it’s relatable. It is always interesting to see what people relate to which tends to be the tragic part of the story.

Malini: I can’t imagine someone leaving here and not being moved.

Felix: People want to be moved. When I go see  I want to  be moved. I wanna see something that’s going to touch me.

Chulisi: I am such a drama queen, I rather stay with the funny.

Malini: I just want to go on a journey. Where are you taking me tonight. Last question: Was there a moment during this process where you said I don’t want to do this anymore. I’m leaving it.

Felix: That happens to me every other day. I say this is my last. I need to get to my wife and my kids. This is consuming and I work 50 hours a week. Should this be the last one?

Chulisi: I feel the same. I always say this is my last show.

Felix: Then I see him on stage and then I say maybe I can stay. I took him out of retirement. He was doing stuff. We both were.

Chulisi: I was done and he was persistent. I was in a place where I was finding some healing. My brother’s name is Johnny. I’m a recovering addict. I know when the universe throws you a sign then something is up.

Felix: In other words, he fell in love with that shit!

Growing Up Gonzales runs through Sunday, April 9th at The Medicine Show Theatre. 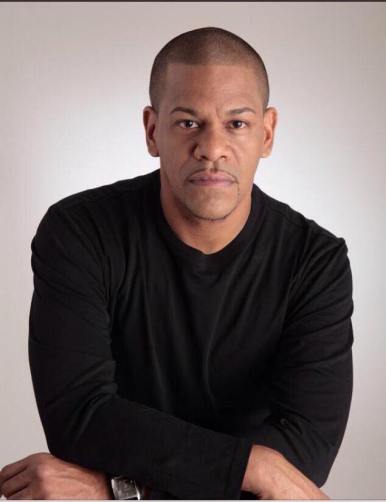 My current project is a one person, two act play called Growing Up Gonzales. Gonzales is a comedy with drama that tells the story of two brothers, Johnny and Cisco, who are brought together by death. It is Johnny’s job to clean out the apartment of the deceased Cisco. While cleaning he finds Cisco’s memoirs and discovers a brother he never really new. It’s a play about love, communication and forgiveness. It opens at The Medicine Show Theater on 52nd Street between 10th and 11th Avenues on Friday March 17th and runs through April 9th.

The Medicine Show Theater is a nice intimate venue, the play works well in this setting, and the location is smack dab in the theater district. If we want theater people to see the show this is where it needs to be. This run of Gonzales is a showcase with the goal to attract some movers and shakers who can help move and shake the show to a bigger and more permanent venue. We have a small group of investors who believe in the project. I think their excitement is contagious. We’re hoping it rubs of on a few people.

I have a couple of projects in development. I have a comedy show called The National Improv League, I have two pilots for TV, a film script, a play with music (that should be traveling soon) and a musical. I think it’s important as a content creator to always have a thing or three in your back pocket. I think the musical will be up next. It’s a big, beautiful and haunting Caribbean spectacular. I’m hoping Gonzales helps connect me to the right people.

It’s not so much who but what. I am most inspired by people who have a dream that they refuse to give up on, I’m inspired by disabled people who accomplish more than able people, People who are kind, like my better half Saida, inspire me, great music that touches my soul inspires me, spiritual food, from any source, that helps me to understand myself a little better inspires me, words from Chekhov, Marquez and Hemingway inspire me, my kids inspire me…all of these things inspire me to create. Inspiration for me is active, it’s engaged…it reaches in a grabs a hold of my soul…sometimes gently and sometimes not. Gifted and brilliant inactive beings are still gifted and brilliant, they’re just not inspiring. I hope I never have to rely on any one person to inspire me.

Felix Rojas is a writer, producer and director of theater, film and television in that order. After taking a 17 year hiatus from the entertainment business Rojas returned in 2010 with a string of hits that has earned him a top spot on NYC’S hottest writers list and has garnered several awards and nominations. Rojas writes about life from the inside out in a way that crosses all social, political, gender and cultural boundaries. With work that is difficult to place into a specific genre Rojas states that “I try to capture life not a genre…life has no genre”. Rojas has several projects for the stage, film and television that he calls “ground breaking”. He hopes to meet the right producer or show-runner that will help bring his work to the forefront.