Since 1997 Horse Trade Theater Group has been home to thousands of artists and independent theater companies, becoming “arguably the epicenter of the independent theater world in New York” (Leonard Jacobs, Clyde Fitch Report) and “a mecca for terrific off-off Broadway theater” (Martin Denton, nytheatre.com). We present 8 annual festivals, including Estrogenius, FRIGID, Queerly, Gotham Storytelling Festival, and the Obie-Award winning The Fire This Time Festival. Last year we presented 450 performances including 25 individual monthly productions. We are proud and honored to celebrate our 20th season and to launch the next phase of our continuing mission to support artists and present the very best alternative, diverse and original theater to our loyal and growing audience.

Beginning in the summer of 2018, FRIGID New York, a now established 501c3 corporation, will continue the Horse Trade tradition at The Kraine Theater and UNDER St. Marks.  By transitioning to a non-profit model after 20 years of faithful and proven community service, we will be able to increase our commitment to paying all artists and staff that create the vibrant work on our stages. We will begin the fundraising efforts to ensure the organization’s future in this city’s always shifting and uncertain real estate market.  As we grow our efforts to provide a home for the next generation of independent theater artists, we welcome your support, financially or otherwise, and look forward to partnering with other like-minded organizations to sustain and strengthen the living treasure that is the independent theater community in New York City.

Horse Trade’s 20th and final season will include Death to The Pumpkin Pie Show (the 20th and final installment), the 20th Anniversary of Dysfunctional Theater, new shows from resident theatre companies The Dirty Blondes and Infinite Variety Productions, and the annual Gotham, STEM, Fire This Time, FRIGID, EstroGenius, and Queerly Festivals.

The Constitution
Written by Mickaël de Oliveira, Directed by Jill DeArmon
Presented by Saudade Theatre
August 31-September 10 @ UNDER St. Marks (94 St. Marks Place)
Four actors, heroes of a new society, are invited by the government to write a new Constitution. Sequestered from society. Six days. No experience in the matter. A perfect Constitution for an imperfect nation.

Show Up
Written & Performed by Peter Michael Marino, Directed by Michole Biancosino
September 14-30 at UNDER St. Marks (94 St. Marks Place)
Directed from a sold out run at the Edinburgh Festival Fringe, Peter Michael Marino’s 4-star critically acclaimed Show Up returns to UNDER St. Marks where it all began last year. This one-man, interactive, improvised comedy is all about the good, bad, and ugly experiences of the audience – who also lend a hand in the set, sound and lights…and there’s a party!

A Night with the Dead
Written & Directed by Martha Lorena Preve
Presented by Something from Abroad
October 26-29 @ The Kraine Theater (85 East 4th Street)
You don’t talk about death, you don’t mess with it, and you certainly don’t question tradition. In a world where death is considered taboo, Catrina, a Mexican girl, will defy society’s rules to find out where our loved ones go when they die. A Night with the Dead is a story about the origins of the Mexican holiday Dia de los Muertos.

6th Annual Gotham Festival
November 1-7 @ The Kraine Theater (85 East 4th Street)
This November, Horse Trade presents the 6th Annual Gotham Storytelling Festival. With storytellers from a variety of ethnic, national and sexual backgrounds, this year’s festival promises to bring you stories that are both intensely individual and strikingly universal. Don’t miss out on a full week of stories that will make you laugh, cry, wonder and want to hear more.  With special guest Christian Cagigal, a storytelling magician from the west.

In Their Footsteps
Presented by Infinite Variety Productions
November 30-December 11 @ UNDER St. Marks (94 St. Marks Place)
Thousands of women served in Vietnam during the war. Barely any of their stories are known. Join the IVP team as they follow the footsteps of five women from all different walks of life who chose to serve their country. Created from five oral interviews, IVP is honored to be taking the words, tales and lives of these women and sharing them with you. In Their Footsteps is not a tale of women who went to war but the stories of everyday life in a warzone and where the journey leads a person after their reality includes dirt, mud, blood and loss.

Winter Burlesque Blitz
December 27-30 @ The Kraine Theater (85 East 4th Street)
The burlesque Blitz will be returning this year with a whole new lineup of loveliness. This year’s festival will be bringing not only live burlesque performances by performers from multiple points on the Gender spectrum, but also a lecture and a movie on the theme, to create a well rounded event for the holiday season.

4th Annual STEM Fest
January 3-14, 2018 @ The Kraine Theater (85 East 4th Street)
Storytellers, comedians, burlesque performers, playwrights musicians and, yes, even scientists will show us just how entertaining the world of Science, Technology, Engineering and Math can be. With some returning regulars and some new voices this year’s festival promises to bring us one small step out of the darkness and into the light.

9th Annual The Fire This Time Festival
January 15-28, 2018 @ The Kraine Theater (85 East 4th Street)
The African American experience is not represented solely by one voice or one style. Horse Trade Theater Group and The Fire This Time Festival provide a platform for talented early-career playwrights of African and African American descent to explore challenging new directions for 21st century theatre.

12th Annual FRIGID Festival
February 14-March 4, 2018
The Kraine Theater (85 East 4th Street) & UNDER St. Marks (94 St. Marks Place)
This very special open and uncensored theatre festival gives artists an opportunity to let their ingenuity thrive in a venue that values freedom of expression and artistic determination. In true support of theatre on the fringe, 100% of box office proceeds go directly to the artists. FRIGID is here to chill out the New York independent theatre scene’s ideas of what a theatre festival can be!

4th Annual Queerly Festival
June 20-July 2, 2018 @ The Kraine Theater (85 East 4th Street)
Queerly, a festival seen through lavender-colored glasses, takes the everyday experiences, jokes and stories of being alive on this planet and views them through the lens of queer identity. A celebration of this diverse, strong, sharing-minded community told through stories, songs, poetry and plays.

Horse Trade Theater Group is a theater development group with a focus on new work that produces a massive quantity of stimulating downtown theater every season. Horse Trade’s Resident Artist Program offers a home to a select group of Independent theater artists, pooling together a great deal of talent and energy. Horse Trade also produces the annual FRIGID Festival, the first and only festival of its kind in New York City to offer artists 100% of their box office proceeds. http://www.horseTRADE.inf 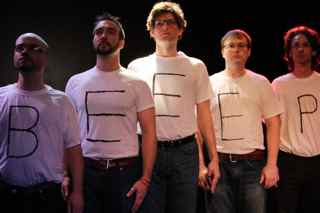 What is your current project? Lucie Pohl: Apohlcalypse Now!

Under St. Mark’s Theater at 94 St. Mark’s Place NYC. Apohlcalypse Now! is a show I wrote after an avalanche of disasters exploded into my life over the course of about 2 years and what I tried to do is grab the audience and throw hurl them onto a roller coaster ride with me. Under St. Mark’s is the perfect space to do that; the moment the audience climbs down those stairs and steps through the door they are already on a journey with you. Under St. Mark’s is not only as intimate as my show but also as gritty, real and unmistakably New York. I cherish this theater since it is one of the last of its kind in the city and hearkens back to a time where you could fall down a manhole on Bowery and land in the most amazing performance you have ever seen.

In late May I will be brining a show to the Cherry Lane Studio which I am very excited about, I’m working on a film script and am doing lots of stand up all over town.

Latin History for Morons at the Public

Lucie Pohl is a German born NYC raised actor, comedian, writer, solo performer, producer and proud immigrant. Her autobiographical storytelling comedy debut HI, HITLER was nominated for the 2015 New York Innovative Theater Award (Outstanding Solo Performance), garnered 5 and 4 star reviews and played to sold out houses at the Edinburgh Fringe Festival, on London’s West End, 59E59 Theatres NY, Los Angeles, The Baltimore Fringe, Dixon Place, Emerging Artist Theatre, across Germany, in Bucharest, Romania and went on to have a full run at IRT Theatre (resident artist) in New York. In 2015, Pohl created her second play, CRY ME A LIVER which debuted at the 2015 Edinburgh Fringe Festival, has been given a run at London’s Vault Festival in early March ‘16 and OFF-OFF Broadway in New York. Her third stand up hour APOHLCALYPSE NOW! played a sold out run at the 2016 Edinburgh Fringe Festival, at the Culture Project in New York and has toured internationally. Lucie Pohl is a regular performer at Dixon Place, UCB, the PIT, IRT and can be seen doing character, storytelling and stand up work at various venues around the city.
Theatre credits include: Three Graces (Immigrant’s Theater Project/3-LD), Alma Mahler: Widow of the 4 Arts (The Los Angeles Theatre), Vocal Migrations (LaMaMa ETC), Flowers in the Snow (Roy Arias), a.o. TV/FILM: FANTASTIC BEASTS AND WHERE TO FIND THEM (Warner Bros.), RED DWARFD XI (Baby Cow/Amazon), HOMELAND (Showtime), THE ODD COUPLE (Margarethe v. Trotta) lead role in the film ‘Magi’ directed by Hasan Karacadag, also starring Michael Madsen (Reservoir Dogs, Kill Bill), NOT FADE AWAY (Paramount Vantage), EL CIELO ES AZUL (Vox3 Films) a.o.. Lucie is the voice of MERCY on BLIZZARD’S OVERWATCH. Creator of the female sketch comedy duo RICH AND FAMOUS (on the in$ide).
MFA in Acting from the University of the Arts in Berlin.

Lucie Pohl is also an op-ed comedy contributor at The Guardian, writes for HuffPost Online, as well as Chortle a.o.