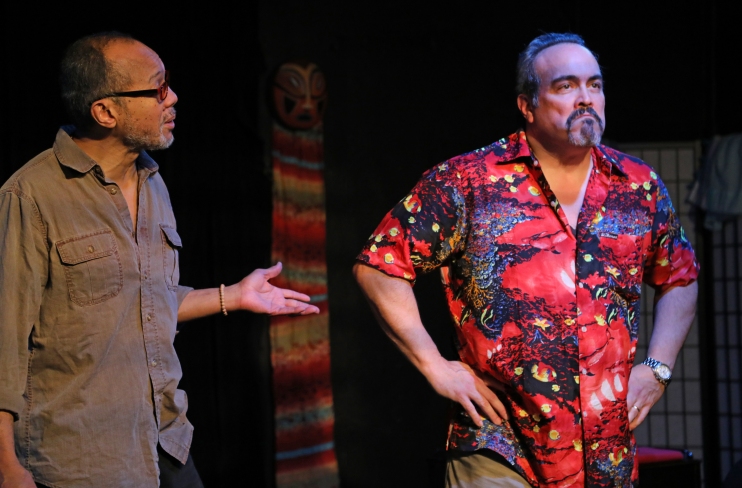 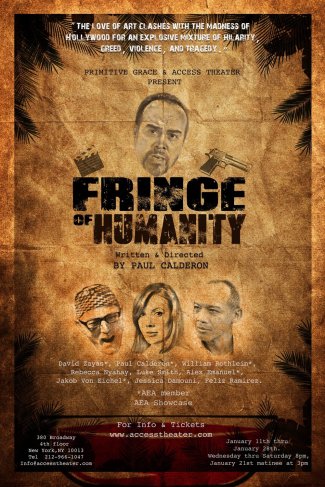 As I got out of my seat, putting my sweater back on, it hit me that I just came off a roller coaster that just kept going up and doing spirals for 106 minutes. The play opens with high energy salsa in the background and a charged opening monologue by Calderon himself. That can at times be worrisome because the only place to go is higher and sometimes  a script doesn’t work out that way. That doesn’t happen here. The talented and giving ensemble pulls the audience into the hotel room and continues  to build the energy to a fever pitch as the story unfolds. Paul Calderon’s Fringe of Humanity is a high- octane, cocaine-fueled explosion of storytelling that keeps you glued to the next word, action, moment.

Fringe of Humanity tells the story of a director, Nick Valdez (played by Paul Calderon), finalizing his script before filming begins and the unredeemable  characters that contribute to the hour and forty-six minutes of mayhem. As they sort out their own defects of characters through the seven deadly sins,  the world outside is also violently crumbling.

FRINGE OF HUMANITY runs January 11 – 28, Wednesday – Saturday at 8pm with an additional 3pm matinee on Saturday, Jan. 21.  Access Theater is located at 380 Broadway on the 4th floor (at White Street) — accessible from the A/C/E/N/Q/R/6 trains at Canal Street or the 1 train at Franklin. Tickets are $18 at http://www.BrownPaperTickets.com.